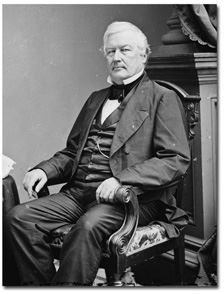 The U.S. Mint is honoring our native son, Millard Fillmore, the thirteenth President with a one dollar coin.

An old copy of The Cortland County Express, printed on July 18, 1850, carries an account of President Fillmore that contains many interesting facts regarding the former president.

Mr. Fillmore was born at Summerhill, Cayaga County, New York on January 7, 1800, and accordingly is now a little over 50 years old. His father was a farmer in very limited circumstances. The family removed to Aurora, Erie County, in 1819, where the father still carries on a farm of moderate dimensions; the writer hereof has often passed the modest house where reside the family of the president, in style not more pretending than is common to thriving farmers of that prosperous district.

The narrow means of the father did not permit the bestowal on the son of any other than a most limited common school education.

When 15 years old, he was sent to learn the trade of a clothier at which he worked four years, improving all his spare time in reading books from a little library in the little village where he lived.

At the age of 19 he made the acquaintance of Judge Wood of Cayuga County, who detected the latent talents of the young man and induced him to study law for which he generously furnished him the means.

Mr. Fillmore remained in Judge Wood's office about two years studying with that industry and perseverance which have distinguished him through life. During this time he also taught school in the winter months in order to provide for his expenses as far as possible.

In 1822 he entered a law office at Buffalo and passed a year in studying and teaching when he was admitted to the bar, and removed to Aurora to commence the practice of his profession.

In 1826 he married Abagail - the daughter of the Rev. Lemuel Powers. She no doubt will hereafter preside at the White House. Several years were now mainly employed by Mr. Fillmore in diligent judicial studies and in the limited practice of a country town.

In 1829 he was elected to the assembly of New York and for three years (during which time he removed his residence to Buffalo) held a seat in that body. Here he was remarkable for devotion to and unwearied industry in his duties. He took a prominent and influential part in the enactment of the law abolishing imprisonment for debt.

In 1832 he was elected to the 23d congress and served credibly. In the fall of 1836 he was returned to the same office and acted as a member of the committee on the election in the famous New Jersey 'Broad Seal' case and in that capacity established his reputation in the house. He was reelected to the next congress and now assumed the responsible position of chairman of the committee of ways and means. In 1844 he was run by the Whigs of New York for governor and was beaten by Silas Wright... 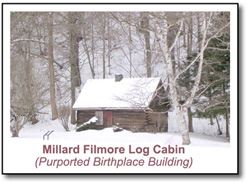 In 1847 he was elected comptroller of the state and removed to Albany to discharge the duties of that office which he held until 1849, when he resigned it prior to his induction into the vice-presidency, to which post he had been elevated by the presidential election of 1848.