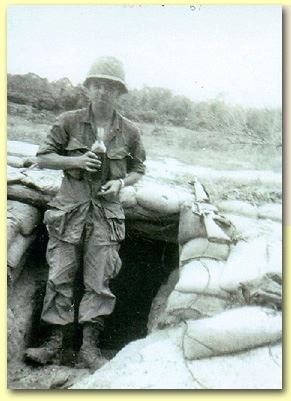 Auburn, NY - The eternal flame burns brightly in the tiny hamlet of Throopsville in Cayuga County, just south of the city of Auburn.

The keepers include Bill O’Hara and his wife, Wreathea. They look after where Robert F. Stryker, who is buried in Pine Hill Cemetery, not far from Route 38. Bill and Wreathea live up the road in Port Byron. Bill’s a Navy veteran and former commander of the Robert F. Stryker Memorial AmVets Post 513 in Montezuma.

Robert Stryker was a local guy. Bill tells me he lived “right around the corner” from the cemetery on Peachtree Road. Forty-four years ago, in 1967, he was killed in a bamboo jungle of Vietnam. He died when he threw himself on a mine as it detonated. He saved a dozen of his fellow soldiers.

In 1969, his family received the Medal of Honor. He’s the only recent recipient of the prestigious award who was a native of Central New York. Forrest Vosler of Marcellus and Memphis got the medal for bravery in World War II.
Robert F. Stryker's former tombstone [sic] in the Pine Hill Cemetery in Throopsville, south of Auburn.

Wreathea O’Hara and her husband devoted themselves to keeping the memory of the hero alive. She’s from Throopsville and went through Port Byron Central School with Robert Stryker. “I have my freedom because of the service of men like Robert,” Wreathea explains. “This is my way of preserving his memory forever.”

Joe Mulcahy from Pennellville feels the same way. He’s a retired Army command sergeant major, with 32 years and four tours in Korea. Joe’s turned over his life to honoring Robert Stryker and publicizing National Medal of Honor Day, which is Friday. 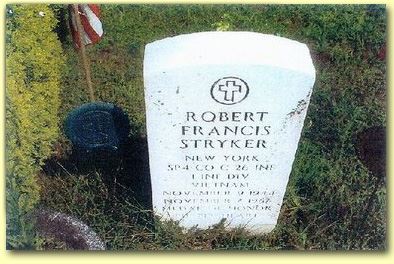 I met the O’Haras and Joe at the cemetery one sunny, cold morning last week. Brass military plaques sparkled nearby on other graves. Later we talked over coffee in a diner nearby.

Bill O’Hara had an interesting memento to show me: Robert Stryker’s Medal of Honor. He carries it in a canvas bag, in a glass case, along with a Medal of Honor flag. The Stryker family turned over his medals to the AmVet post for safekeeping. Bill keeps them in a bank safety deposit box.

“I remember him as short,” she told me with a laugh.

She told ST. Sims, author of a book on the battle that took his life, “Robert tended to portray a hard shell to others. He wouldn’t back down when confronted by others (at school). But under that shell was a soft and caring heart.”

Sims described Robert as “kind of a loner. Several Charlie Company (his in the 26th Infantry Regiment) told me that he tended to keep himself somewhat aloof.” More than likely, Sims guessed that may have been to protect himself from the emotional consequences if the another soldier were killed.

Robert was a grenadier, a marksman with a grenade launcher. He enlisted in 1963 and later re-enlisted for three years, even though his older brother, Jack, told Sims he really didn’t like the Army and wanted out. He’d gotten into trouble with superiors and had been demoted. He was a Specialist Fourth Class.

He was the unit’s point man. Fellow soldiers told the writer “Bob Stryker was not a man you could have predicted to earn our nation’s highest award for valor.”

His brother soldiers have done right by Robert in Throopsville. Post 513 was formed in 2002 and adopted his name the next year, taking responsibility for his grave site. Robert was buried under an upright military stone next to his parents and grandmother. His mother, Frances, died in 1950, when her son was 6. His dad, Harold, died in 1987 and went to Washington to receive the Medal of Honor from Vice-President Spiro Agnew in 1969. His sister, Leola, passed away also.

“He could have been in Arlington (National Cemetery),” Bill O’Hara said. “The family wanted him back here.”

Members of the Montezuma post weren’t happy with the burial place. One outside Army officer said he was “dumbfounded” when he found it. The veterans cleaned up the site and put up a fence “so that when people saw it, they knew there was something special about the grave.” In 2004, they raised money for a new head stone, an impressive marker of black granite that rises five feet. The post got a grant, provided through town of Throop councilors, for two flag poles. Local contractors hooked up a feed so the flags are lighted at night. There’s a stone bench.

Route 38 was renamed a “highway of valor.” A new armored vehicle was called “The Stryker” for Robert and a World War II private first class, Stuart Stryker (no kin), who also got the Congressional Medal. In 1980, a senior high-rise in Auburn was christened “Stryker Homes” in his honor.

Joe Mulcahy is an old friend from Marcellus, where I grew up.

Back then, he was a ward of the state and lived with Fred Hyatt and his wife at their tree nursery. He spent time at the House of Providence orphanage, too. At 18, Joe paid a drunk five bucks to sign him into the Army by claiming to be Joe’s father. He got involved with Robert Stryker at the request of the 26th Infantry, Joe’s outfit, also.