The town of Scipio was one of the old townships of the Military Tract and was formed March 5th, 1794, and was named after Scipio Africanus, the Roman General. It originally included Sempronius, which was separated March 9th, 1799, a part of Marcellus, Onondaga County, set off in 1804, and the towns of Ledyard, Venice, and part of Springport, which were set off January 30th, 1823.

About 1789 the land in this area was allotted to Revolutionary soldiers, who drew lots for their pieces, and often traded to get tracts adjoining. 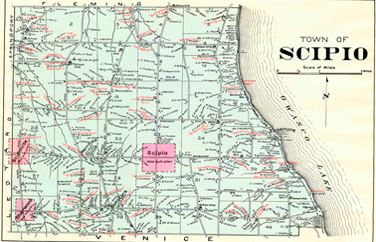