When the soldiers of the Clinton-Sullivan Expedition against the Iroquois Indians came into what is now the central part of New York Sate in the summer of 1779, they were much impressed by the fertility of the soil, the fine crops raised, the general lay of the land and the abundant supply of water available for power and water travel. They were much interested in the Finger Lakes Region and the Genesee Valley 6, and many decided to return at a later date. Many did start out to make settlements in the Genesee Valley and reached there; but some became tired of traveling, and seeing that the Finger Lakes Region was a good place to locate, remained there and became early settlers of Cayuga Count and the Town of Sennett. 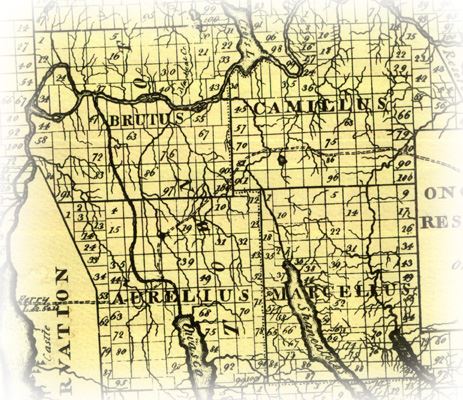 They came from Vermont, Massachusetts, Connecticut, and the eastern part of New York, especially the counties of Columbia and Dutchess. They were primarily of English descent, they or their ancestors having come from England in the late 1600’s and early 1700’s to Rhode Island and Massachusetts.

When the Military Tract was set up January 27, 1789 and sections were allotted to the soldiers and officers of the Revolution, these openings also influenced settlers to locate here. Sennett is part of the original townships of Brutus (Lots 97-100) and Aurelius (Lots 7-12, 18-23, 28-32, 39-43, and 48-52). Many of those to whom lots were assigned never saw them, but sold them to others. One example is John Sunderlin of Vermont, who came in and built a log residence on what is now Franklin Street Road.

One Revolutionary War soldier who did settle on his allotment was Sergeant Jacob Hicks who drew Lot No. 99 of Brutus. He settled here in 1797, apparently sold part of his property to Amos and Susannah Bennett. He made his farm home across the road, facing onto Jericho Road. He and Polly Hicks were charter members of the Baptist Church.

It was not until 1794 that white people made permanent settlements in this section. The first were made on Lot 21 by Deacon Ebenezer Healy, Joseph Atwell, Thomas Morley, Sr, and Thomas Morley, Jr. In 1795 came Judge Daniel Sennett, Amos Bennett, Jacob, Rufus and Daniel Sheldon, and Thomas Barnes.