Congressman Elbridge G. Spaulding, Father of the Greenback. The Greenback, the first paper currency of the United States.

Elbridge G. Spaulding was born in Summerhill, New York, in Cayuga County, on February 24, 1809. He was the first of nine children of Edward and Mehitable, pioneers of Central New York. He received a fair education, growing up in moderate circumstances.

Elbridge G. Spaulding, a banker, of Buffalo, NY, famous as the author of the greenback currency of the United States, descends from one of the oldest families in America, his ancestor, Edward Spaulding, an English Puritan, having settled in Massachusetts soon after the arrival of the Mayflower.

The family has been conspicuous in each generation for sterling character, usefulness and good repute. Edward Spaulding, a descendant of the founder and of New England birth, was one of the pioneers of Central New York. He was a farmer and a man of strong qualities. Upon his farm in Summerhill, Cayuga county, NY, his son, Elbridge G. Spaulding, was born, February 24, 1809.

The lad gained vigorous health during his early years upon the farm, and from a worthy father and mother the soundness of character which has distinguished him through life. He was educated in the local district schools and the academy at Auburn, and then went out into the world as a school teacher. But this was a temporary expedient. Later, he studied law in Batavia and Attica, NY. 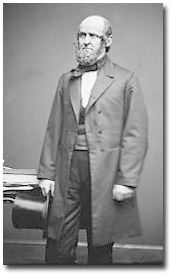 Mr. Spaulding moved to Buffalo, then a small but thriving city, in 1834, and formed a partnership in the law. His talents were soon recognized, and, by untiring labor, he rose to a large and prosperous practice. Prompted by inclination and reading to a study of finance, Mr. Spaulding advised the removal of The Farmers' and Mechanics' Bank of Batavia to Buffalo, and when, in 1852, this change of location had been effected, Mr. Spaulding became president of the bank.

To the affairs of this institution, he devoted himself with interest and energy and soon relinquished the law altogether. He has remained at the head of the bank down to the present time. During the War, he reorganized the institution as controlling owner under the national banking act, and has conducted its affairs ever since with credit to himself and advantage to all concerned.

From early manhood, Mr. Spaulding has been active in public affairs. His eminent purity of character and strong mind fitted him for positions of trust, and he was elected Mayor of- Buffalo in 1847, Assemblyman in 1843, Member of Congress, 1849-51, State Treasurer in 1953, and again Member of Congress, 1859 to 1863.

A Republican in politics and loyal to the Union during the War, he performed services which his experience and intimate knowledge of the resources of finance made of incalculable value to the Federal government during that historic struggle. It yeas during his third term in Congress that the incidents occurred, which established his fame and placed his name permanently in the public annals of the republic.

Creation of a New Currency

December 28, 1861, the Government and the banks suspended specie payments. Two days later, Mr. Spaulding had prepared and introduced into the Horse of Representatives the celebrated act, authorizing the issue of legal tender paper currency. The leading object of this measure was the creation of a currency, national in character, for the liquidation of War expenses, the payment of taxes and the facilitating of business operations between all classes of the people, and, to prevent any plethora of the currency, it was proposed that the new notes might be at any time funded in 6% government bonds.

Mr. Spaulding advocated the new measure as a public necessity, a constitutional proceeding, and a means of carrying into full effect the war power of the United States government. After full discussion, the bill was passed by both houses of Congress and became a law, February 25,1862.

A farther issue of legal tenders was also authorized by law, the opening speech in the discussion in the House being made by Mr. Spaulding. These measures and the currency they authorized were of enormous service to the cause of the Union and won for Mr. Spaulding the soubriquet of the father of the greenback. The amount of the notes now outstanding is $346,000,000, and the law provides that it cannot be reduced below that sum.

Mr. Spaulding was also the author of the National Banking act, although the idea embodied in that law did not originate with him.

In 1869, he issued a History of the Legal Tender Paper Money, which is regarded as the clearest and most valuable exposition of the origin, history and objects of the great financial measures with which his name is identified, and has since become the authoritative standard work on this subject.

Since the War, Mr. Spaulding has devoted his attention mainly to his bank in Buffalo. He is a forcible public speaker and was chosen to deliver the address on One Hundred Years of Progress in the Business of Banking, at the Centennial Exposition in 1876.

He is a large owner of real estate in Buffalo, proprietor of a beautiful Summer resort of 36o acres on Grand Island in the Niagara river, and president of The Buffalo Gas Light Co. His large mansion is surrounded by attractive grounds. By virtue of his ancestry, Mr. Spaulding is a member of The Sons of the American Revolution, and his patriotic regard for the services of the members of his family who fought at Bunker Hill, has led him to erect a granite memorial in honor of their memory in Forest Lawn cemetery.

Mr. Spaulding was married in September, 1837, to a daughter of G. B. Rich. His second wife was Mary Strong, and he is the father of Mrs. Sidway, E R. Spaulding, cashier of the bank, and Samuel S Spaulding, a prominent director of The Electric Street Railroad.