The area was used for hunting by the Cayuga tribe. Throop was within the Central New York Military Tract, reserved for war veterans. Settlement began around 1790.

The Town of Throop was formed in 1859 from parts of the towns of Aurelius, Mentz, and Sennett. The town is best known for the wide variety of colorful houses found throughout its various 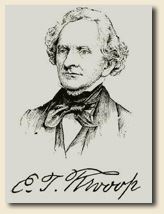 neighborhoods. These colors can range anywhere from a muted taupe to a bronzed eggshell.

THROOP, named in honor of Ex-Governor Enos T. Throop, is an interior town, lying near the center of the County. It is bounded on the north by Mentz and Brutus, on the east by Sennett, on the south by Auburn and Aurelius, and on the west by Aurelius and Montezuma. It was formed from portions of Aurelius, Mentz and Sennett, April 8th, 1859.

The surface is greatly undulating, though broken in places by sand and gravel ridges, which have an elevation of 100 to 150 feet. The steepest declivities are in the west part. It is well watered by Owasco Outlet, Cayuga, Spring and Cold Spring brooks and numerous springs. The Outlet is abundantly stocked with pickerel, catfish, perch and large nice whitefish.

The soil on the west side-hills is clayey, requiring much fertilizing to make it productive, and is then soon exhausted; while the east sidehills consist of sand and gravel, and are of almost inexhaustible fertility. The soil in the valleys is a sandy loam, and is rich and productive.

The town contains some of the finest gravelbeds to be found in the State. The gravel is much used upon the roads, which, as a rule, are unusually good in this section of the country.

On the Outlet, about one and one-half miles below Throopsville, is an extensive bed of gypsum, which covers several acres, and exposes on the east bank of the stream a thickness of thirty feet. It is a good quality of the sulphate of lime, which is an excellent fertilizer, and has been used to a considerable extent. Opposite, and about a mile west, in a marsh on the farm of Philo Sweet, is a deposit of marl covering several acres, and known to be six feet deep. Lime was obtained at an early day from the hill on the farm of Mrs. Clara Thompson. Near Wyatt A. Benham's mill is a sulphur spring of superior quality, but no steps have been taken to develop it. On the farm of Perry Manrow, about two and one-half miles north-east of Throopsville, is a large and copious spring, which is strongly impregnated with sulphate of magnesia. There is another of like character on the place of Mrs. Betsy Atwater, about one and one-half miles West of Throopsville.

The Southern Central Railroad crosses the north-east and south-east corners of the town.

It is well known that this section of country was the favorite hunting ground of the Cayugas, who, at the completion of the federation of the Five Nations, were designated as a "people whose habitation is the 'Dark Forest,' and whose home is everywhere," and were denominated the fourth nation, "because of superior cunning in hunting." But there is evidence that the territory embraced in this town was vested with more importance than attaches to their temporary encampments while on fishing and hunting excursions. When the first settlers came in there was a fort, round in shape, and enclosing about two acres, on the farm of Michael Madden, near the center of the town. In 1814, after having been plowed for successive years, the embankment was too high to be driven over. Adjacent to the fort human bones have been exhumed, evidently those of Indians.

Settlement was commenced in 1790, by Ezekiel Crane and his son Shadrach, from New Jersey. They located on lot 2, in the north-west part of the town, a little south-east of the locality early known as the Ward Settlement. The fact of Crane's being the first settler is noted on the tombstone erected over his remains, on the farm on which he settled. The Cranes sold the farm to St. Clair Smith, and removed to Michigan about 1823. It is now owned by William Fowler. Shadrach Crane and Hannah Palmer contracted the first marriage, and Ezekiel Crane was the first child born in the town.

In 1796, Isaac Barnum, Othniel Palmer and son, from Connecticut, and Israel Clapp, from Massachusetts, settled on lot 16; Wm. Duvall and James Leonard, from New Jersey, the former on lot 2 and the latter on lot 4; and Jonas Ward and his son Caleb, from the same State, on lot 92. Barnum came in with his family, and located about three-fourths of a mile west of Throopsville, where Morton Hosford now lives. He lived in the town many years. Palmer moved with his family to Wayne county. Prentice, his son, built the first saw and grist-mill. Clapp settled a little east of Barnum, where Wyatt A. Benham lives. He was a farmer and weaver, and had a large and respectable family. He was also an inn-keeper. He built and kept the first inn in 1800. He died some twenty years ago on the old homestead, where his wife also died. His daughter, Mrs. Cook Tyler, is living in Port Byron. Duvall came in with the surveyors and settled with his family on the Murdock farm, in the north-west part of the town. He removed to Port Byron, and subsequently to Campbell's Island, in Seneca River, which he bought some forty years ago, and where he died and is buried. James and Manasseb Leonard, Giles and Wm. Meads, brothers, and Joseph Farrand, settled near Duvall very early. Farrand moved in with his family from New Jersey, and settled in the north-west part, on lot 13, on the farm now owned by Wm. Fowler. The family removed to Michigan about the same time the Cranes did. The Wards settled on the farm now owned by Chauncey Carrier and gave the name to the locality known as the Ward Settlement. Stephen Ward, a son of Jonas, is now living in Mentz.

Christopher and Rev. John Jeffries, from Saratoga Springs, settled in 1799, at Throopsville, where the former kept a hotel for many years, and where he died and is buried. John Jeifries was one of the first ministers in the county. He ministered to the spiritual wants of the people in all this section of the country. Settlements were made the same year by Ephraim Wethey and Manonah Clark. Wethey located near the center, on lot 4, his land bordering on the creek. He was from Dutchess county, and kept a hotel a good many years in the house now occupied by Jeremiah B. Clark, where he died some thirty five or forty years ago. Chauncey and Erastus Wethey are his grandsons. The former is the present (1879) Supervisor and is living in the north part of the town. The latter lives in the south part of Mentz. Manonah Clark was from Oneida county. He settled a little west of the center, on lot 4. He was the maternal grandfather of General John S Clark, a civil engineer of Auburn, and the first Supervisor of Throop.

Dr. Joseph Clary settled at Throopsville about 1800. He was the first physician there, and practiced in the village till his death in 1863. David and Amos Codner settled the following year a little west of Barnum, on lot 14. Some of their descendants are still living there.

In 1802, Younglove Manrow moved in with his family from Sharon, Conn, and settled on lot 6, on a tract of 400 acres, which he took up and cleared. He built a cloth-dressing establishment at a very early day on Cold Spring Brook, on the site of the saw mill owned by Martin Van Aken, and pursued that business for several years. He subsequently erected a saw-mill on the same site, which has long since gone to decay. He died about 1831, and is buried on the old homestead. Myron C Manrow, his youngest child, who is living in the northeast part of the town, near the old homestead, is the only one of his children living in the town; though numerous descendants of the Manrow family are living in the same locality. Younglove Manrow, Jr., who was born in Sharon, Conn, and was ten years old when his father moved in, lived in this locality till his death, August 17th 1865, aged 73 years.

Mr. Myron C. Manrow relates that there was a deer-run across the hill in this vicinity, and that one winter, soon after his father settled here, sixteen deer were driven into the latter's barn in one drove, the sharp crust upon the snow making it difficult and painful for them to proceed.

Benjamin and David Horton, Ira Hopkins, Moses Treat, and his son, Chester, settled in this locality soon after the Manrows. John and Benjamin Waits, brothers, also settled in the northeast part, on the farm owned by Otis Ingalls. John kept a store in the village at an early day, in the house now owned by the Raymond family and occupied as a dwelling. It is a double house. He kept store in one end and lived in the other.