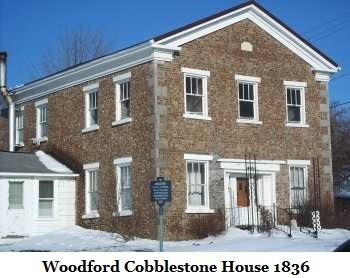 The name of the Town of Victory and Victory Village originated from the "victory" achieved by those who favored a division of the Town of Cato, one of the original 28 military townships of the Onondaga Military Tract set up by the NY State Legislature in 1792. Each tract contained 100 six-hundred acre lots. On March 16, 1821 a legislative act created the present Towns of Victory, Ira, Conquest, and Cato from the original military township of Cato.

The first settlement in the Victory Village is believed to have been made about 1800 by James Gregory who settled near the site of the store later occupied by Hager family in the center of town. Gregory opened a tavern built of logs. Another early settler was Manasseh French, who came from Scipio and opened the first store. Others merchants opened stores, but many failed as business was rather precarious in those early days as pioneers made a living as best they could from dense forests, graveled hills, and fever-bearing swamps.

Other early settlers in the outlying parts of the township were Thomas Coleman and John Martin from Ireland, John and Daniel Rumsey, Jacob and Martin DeForest, and coming from Newburgh, Conrad Phrozine, who built the first grist mill in North Victory on the creek at Sebastian Stumm's mills. John Hooker and Chauncey Cramer later built a sawmill and gristmill on what is now White Road near the headwaters of Little Sodus Creek in the southern part of town. Their millstones were particularly fine so that their flour was sought after for its superior quality.

Also, a group of eight cabins stood on a small "island" in the vast swampy area southwest of the center of town on present Stahlnecker Road It was known as "Flattville" where Nathaniel Flatt and his family and a few other families lived. The postmaster in 1879 was Addison B. Wetherby who was appointed by President Lincoln in 1860. Mr. Wetherby was in the boot and shoe business also. The first physician in this locality was Dr. Squires.

Addison Parsons ran the undertaking business and even had a display room. Another early settler was Homer Lockwood who founded the Methodist Episcopal Church in 1813. He was also founder of the first school house, first academy, and actively promoted temperance reforms. The Presbyterian Church was founded in the home of Thomas Coleman in 1820. A Baptist Church was organized in 1818 and later became the Town Hall when members disbanded to other churches in the early 1900's. Matthias Vanderhuyden was the Commissioner of Schools.

Turn of the Century

At the turn of the century (1900's), Victory was thriving according to early historical reports of Wellington Cramer and Ben Reynolds. There were two blacksmith shops, an undertaking business, harness shop, four general stores, three churches, a meat market, milliner shop, and creamery. There was also a big three-story hotel, the Grand Hotel, with a livery stable and hitch barn. On the top floor of the hotel was an auditorium and dance floor with a stage for music. Hub Daratt was the proprietor of the hotel. A stagecoach line from Red Creek stopped in Victory every day. It was driven by John Caywood who went on to Cato and then back home to Red Creek.

Early settlers in Westbury, (half of which is in the Town of Victory) were William and Jacob Burghdorf who owned tanneries and mills. James Shaver ran a carriage shop and Samuel LeFavor had a cooper shop there.

The Town of Victory is honored to have four state historical markers, the first honoring the settlement in the town in 1800 by John McNeal, John Martin, and James Gregory; the second in North Victory for the first settlement by Conrad Phrozine in 1812 at the site of the mill he built; a third in Westbury for the first settlement in 1806 by William and Jacob Burghdorf and for the Methodist Episcopal Church organized in 1816 and built in 1838; and a fourth for the Cobblestone house in Victory village built in 1836 by Joseph D. Woodford used as a select school with a second floor ballroom and a wooden addition on the rear used as a creamery.